I believe an official welcome to 2021 is in order now that it is February.

We are allowing ourselves to oscillate between the daydream and reality of getting back to Italy. In just the last month the feeling is much more optimistic— even though we seem to still be in the thick of uncertainty there does seem to be light at the end of this tunnel.

To paraphrase a favorite Italian/American, Dr. Fauci: Let’s work hard at getting our masks good and stinky before throwing them away in a healthy future.

Speaking of good and stinky (well, the good stinky), one fun relationship that has been keeping our household happy is that of Mike Phillips of the Red Table Meat Company in Minnesota.

Mike and I are both from the upper midwest (lovingly known around my house as Baja Canada). Mike is a cyclist—he raced and rode bikes in the same places I did as a kid, and was also bitten by a travel bug. His travel bug led him to start a salami company in the US. I thought I knew lunchmeat from growing up in the US, then I went to Italy and experienced the real deal of expertly crafted preserved meat. It changed me forever. Red Table salumi are as fine as the best salumi I find in Italy. They have simple flavors and few ingredients, the depth of flavor comes from high quality meat cured with knowledge and attention to an ancient craft.

I asked Mike about his background riding into the food world, here are his words if you are up for savoring more:

I raced some citizen races when I was 17/18 in NW Iowa. I was from a small farming town and there was really nothing around. I got into it all by riding on Ragbrai. I drove out in ’85 with a couple friends to watch you all race the Coors Classic. I believe we saw Aspen and Vail. I can never find any results from it. I do remember in the crit about halfway through there was a break that had been off for a bit and the Badger had enough of it and went to the front and strung it out to bring the break back… so amazing to see all of you race in the heyday!

I moved to Minneapolis later that summer to go to Hamline University with all intentions of racing but there was little or no time/money/support and I gave that up. 17 years later I started again and raced for about 8 years on the road and 12 with cyclocross. I started coaching kids as well as two of mine raced for a while.

I was a chef in the Twin Cities for 20 years and loved curing pigs. I had done some traveling in Europe, but no living. I was a Slow Food delegate in 2010 and did some deep dives into production in Italy. I also did some stints with a friend who ran bike tours in Provence. I would ride and then cook for the customers everyday. Bliss.

The take away for me in Europe was the exposure to the sense of pride that folks had in the food that they produced and the food that was produced around them historically. It seemed it was the source of bar fights as it was that fierce. It also drove regulation in those countries around how the food was produced. I had been working with local farmers in Minneapolis for years and took aim at healing a really messed up food system. I thought that the thing that was really missing was that fierce sense of pride. I noticed that some California chefs had been taking pigs from Iowa and Minnesota and creating “California” dry cured product. I couldn’t figure out for the life of me why those amazing pigs that were raised in the Midwest by small heritage breed farmers were travelling all the way to the West coast to become realised and highlighted. We should have been doing amazing things here with our pigs. They were ours afterall. I started Red Table with the mission of creating something truly regional and something with which folks from the Midwest could have great pride. Somedays that works!

Most of my craft was taught to me by an amazing human, Francois Vecchio, a 84 year old Swiss butcher, who moved to the US in the late 70’s. I have learned how to highlight the pork and not hide it from Francois. The Vecchio salami is named for him!

I also learned from him and from travels in Italy that salami is best eaten young and fresh. There is a bell curve of goodness to a salami not unlike good Barolo or great Brie. It is best at peak freshness and doesn’t necessarily go bad, but kind of dumbs down as it gets older and you have to slice it thinner and thinner. It is also full of probiotics when it is young and fresh. The original health food… 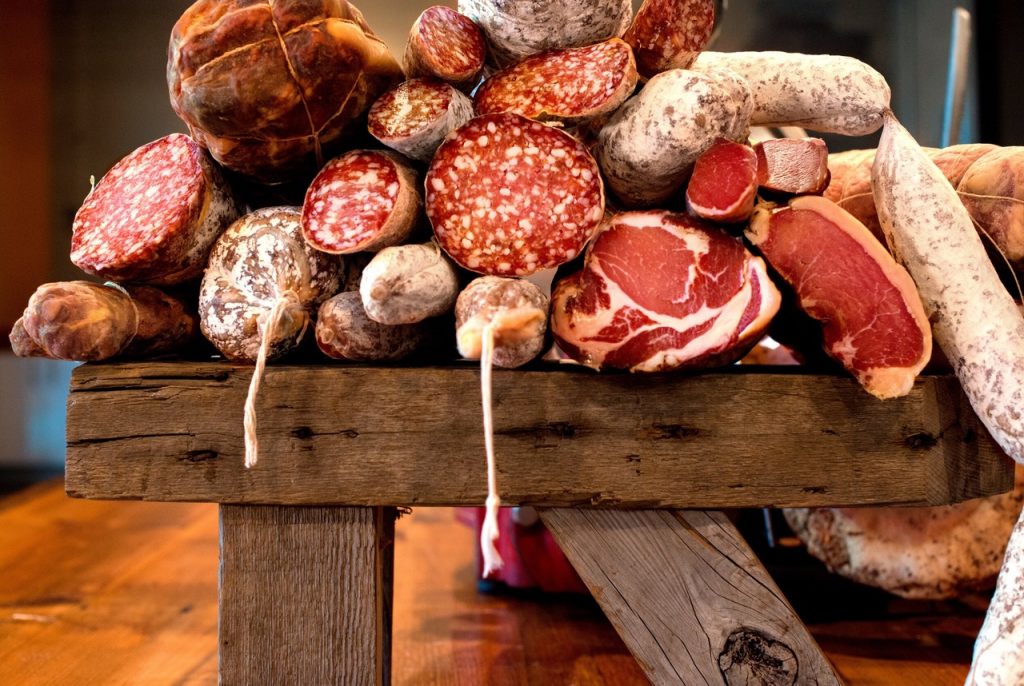